Have I ever told you the difference between dem Dekan and myself? It's easy. I'm the good girl and he's a bad boy. Ugh, Mom is giving me the look again. Yeah yeah, he isn't always bad, only if he's awake. Of course that has a lot to do (I hope!!) with him being such a youngster - he just turned 1 1/2, the spring chicken - and my being a lady in my best years with experiences that he's lucky not to have. I'm talking about my life in the streets of course.

I also know how to work. My task is mostly to supervise and like most cats, I am very good at that. After I finally got my own office chair which by now has been made more comfy by the addition of a soft blanket (under which I like to crawl and hide, so I can get a nap in every, now and then), I can always be close. Mean people - one mean person, to be exact - have accused me of sleeping on the job, but if you look closely, you can see my eyes being open. 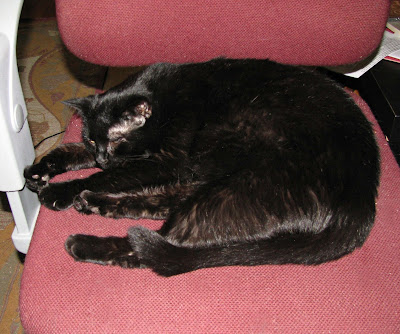 Der Dekan is eager to work, only his definition of it is very different from me. It involves jumping, batting stuff off the walls, may they be pictures, magnets, or hats, knocking stuff over on the desk or knock them off the desk, trying to steal things and - that is very important to him - always having his claws out and his sharp teeth ready in case someone is trying to keep him from wreaking havoc.
His job description can't be the same that Mom has for him.

The other day there was a post on Facebook about a lady putting two boxes on the desk for the cats and Lo and Behold! The cats went in there and all was well in Facebookland.
Mom had just got a parcel with shoes and the shoebox was still around for us to play with. It fit perfectly behind the laptop, and believe it or not, it didn't take a minute and der Dekan was in there which was rather a surprise for me. We both are not as crazy about boxes as some other felines are.
Mom was delighted. Was that really the solution for him sleeping peacefully on the desk without trying to push the laptop off using the force of his, erm, delicate body and legs? 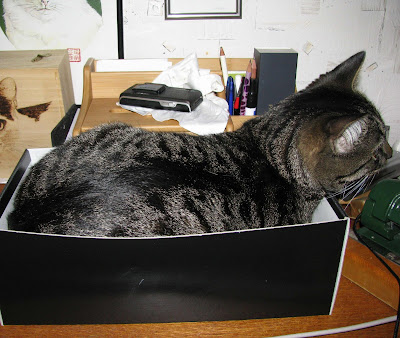 That looked good, very good. We were not sure how that big head would also fit in there, but for once it was a blessing that Mom has huge feet and wears shoes that could serve as small lifeboats. Any smaller and there wouldn't have been a chance for den Dekan to get into the box at all. 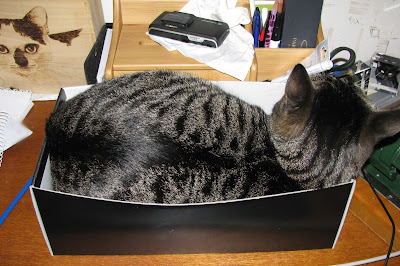 Yeah, it looked a little snug. Would it be comfortable enough for him to stay in there?
Der Dekan is no natural "loafer", meaning he very rarely likes to sit like a loaf of bread. He likes spreading out in as many directions as possible which is one reason why Mom woke up the other day to find that she was lying in bed in the wrong direction with her feet firmly on the ground instead of the pillow she uses. The pillow had been conquered by a not so small cat.

Oh. That didn't look promising. One leg was already out of the box. 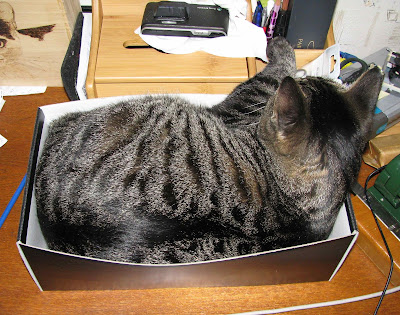 And then all hell broke loose. Unfortunately I had to laugh so hard that I couldn't take over to take more photos or, even better, make a video of what happenend next.
Der Dekan pushed himself against the laptop using the whole box, then half of him kind of flopped out of the box curling around the laptop shoving things on the desk around.
Mom tried to push back which led to the use of sharp weapons on the furry side, to Mom's hectic attempts to keep the desk from being destroyed completely, and finally the immediate removal of the box.
All in all this didn't take longer than maybe one minute from the occupation of the box to its removal.

I call it an epic fail and I'm sure that Magica on the left and Ponder on the right thought the same judging from their looks.
Mom was mad - which was not okay, after all it had been one of her stupid ideas - der Dekan felt empowered and went knocking off some more stuff elsewhere.

I don't understand why I'm not being paid a hazard pay for having to live here with these two crazies!