I have lived in the streets. Been there, done that, got the t-shirt, and decided to never go back after Mom offered me a warm bed, armchairs, rugs, and blankets almost exactly five years ago. Yup, on May 23rd, we ladies celebrated the best thing that has ever happened to Mom (and I don't care if she's trying to tell me about her other gotcha stories).
Der Dekan didn't celebrate. He didn't have time for it, there are always things to do.
That's fine with me, I like my special time with Mom. She tells me how beautiful I am - true - how lucky she was to get a gorgeous girl like me - true - and she even gave me bits of cheese - don't tell anyone, I'm not really supposed to have it, but there were no bad consequences, so don't scold her. Of course she can't resist me. Who can?
Anyway, I know where I want to stay and what I want to do and don't want to do.
I don't steal, I'm sweet, I'm as loyal as I can be, and I don't steal. Oops, did I say that twice? You know where I'm getting at, do you ..... Let me tell you a story. 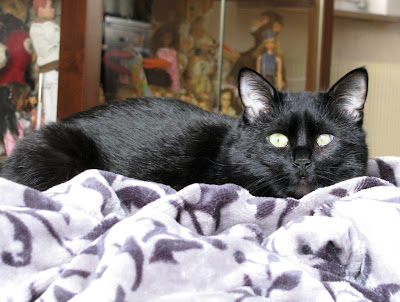 It was two weeks ago.
Mom was in a whiny mood because her back had gone back out some time before, and although she could already perform the important tasks around the house again - food and water for us and our litterboxes - she still walked like an 80 year old and moaned so much that it was kind of hard to nap in peace.
Suddenly I heard her laugh out, though.
Apparently, she had looked for something in her underwear drawer and found a black undershirt that she had only worn once or twice in years, so she decided that it was time to get rid of it. She put it down next to her, but when she was done and turned around, the shirt had gone.
As it's rather a rare event for shirts to go walking on their own, she immediately knew her main suspect. He was rather small, had stripes and had been a hardcore criminal since his early youth.
When she went looking for the culprit, this is what she saw ... 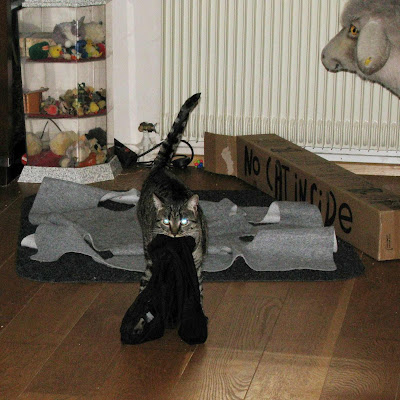 A feeble attempt at hiding the goods in the usual place, his "play rug". 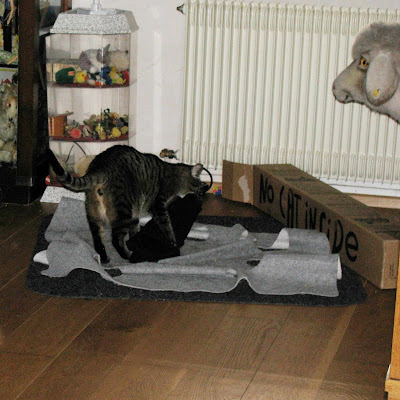 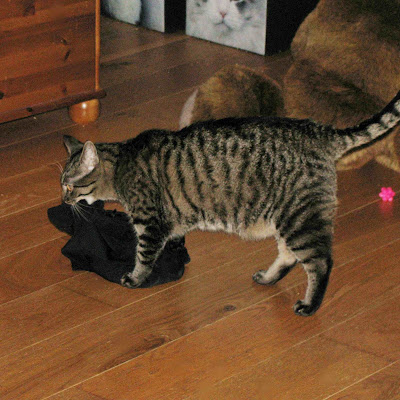 Slippery PVC is every thieving kitty's enemy, especially if both his front feet are on a shirt that makes it even worse. I really wish there were a video of this because I have to admit it made me laugh, too.
It looked to me as if this escape had not been planned very well. 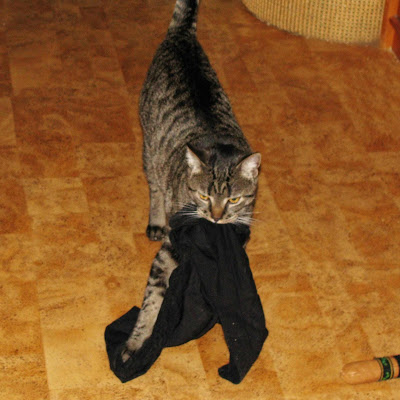 In the end, the shirt ended up on the play rug from where it disappeared shortly after. Believe it or not, but it hasn't been found yet ......

Now you tell me. Is der Dekan a mighty hunter as Mom claims or is he just the little thief that I take him for?